Heads up, Arizona drivers: New rules are on the horizon, and there will be a test.

Starting this spring, Arizonans taking the written driver’s license test will need to know what to do if they are pulled over by a police officer. And later this summer, passengers may have to show their own IDs if an officer asks — something not required in Arizona for more than a decade.

Black community leaders have worked with the Governor’s Office, the Arizona Department of Transportation and law-enforcement officials for several months on additions to the state’s written test and an informational pamphlet about how drivers should respond if they are pulled over by police — and what drivers should expect from police.

Rep. Reginald Bolding, D-Laveen, has helped lead the conversation. He said the additions are expected on the test starting this spring.

His goal, he said, is to ensure drivers survive interactions with law enforcement. He said he wants to prevent in Arizona what happened in July in Minnesota, when a police officer fatally shot Philando Castile during a traffic stop.

“This incident allowed members of the community to get together and have a conversation about what should you do once you are stopped by a police officer,” Bolding said.

He said he and others surveyed 20 individuals and nearly a dozen police departments, and got different answers from everyone. 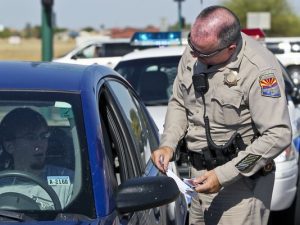 Bolding said he’d planned to introduce legislation this session to educate drivers and police on a single set of procedures, but he was told by Governor’s Office staff that the effort didn’t require a new state law. Staff members connected him with ADOT and  Arizona Department of Public Safety officials, and the group has worked the past few months to develop an agreed-upon set of steps for drivers.

Don’t reach for the glove box

The biggest misconception from the public, Bolding said, is that drivers should first reach for their registration and proof of insurance from the glove box. Police don’t know what  drivers are reaching for, he said. Instead, drivers should roll down the window, place their hands on the steering wheel and await instructions.

Bolding said there’s also confusion about what to when a weapon is in the car, particularly since Arizona does not require a permit to carry a concealed weapon. He said drivers should let the officer know there is a firearm in the vehicle. The officer may take possession of the weapon as a safety precaution until the stop is complete, and then return it.

There will be a public rollout of the new information and an effort to educate drivers about their recourse if they believe they experienced discrimination. And Bolding said the education will go both ways: He’s also working with Arizona Police Officers Standards and Training Board, which oversees certifying officers, on training officers.

ADOT spokesman Doug Nick, whose agency oversees the Motor Vehicle Division, confirmed that the new information will be in the pamphlet and on the test starting this spring. He said the wording is being finalized and should be available in the next few weeks.

State law doesn’t set a specific procedure for drivers, other than to require that a driver pull to the right and stop when it’s safe to do so.

American Civil Liberties Union of Arizona spokesman Steve Kilar said the group has concerns about the proposal. He said the test and educational material “need to be very clear whether or not these are suggestions or are legal requirements.”

A state lawmaker this session also has introduced a bill that would require passengers to produce identification if an officer requests it. That was the policy prior to 2003, when an Arizona appellate court ruled the law was too vague to enforce. The bill attempts to clarify the requirement and put it back in use.

“We want to make sure passengers identify themselves correctly in any vehicle that’s stopped by a police officer,” said Rep. Anthony Kern, R-Glendale, the sponsor of House Bill 2305. “This is about giving officers the ability to do their job correctly. An officer needs to know who is in the vehicle. It’s about safety, from an officer’s standpoint.”

Kern said he worked with local law enforcement on the bill. He said it is not connected to any immigration enforcement effort.

The original law required “evidence of identification,” prompting the court in 2003 to rule it was unconstitutionally vague. The proposed law clarifies that the evidence must include the person’s full name, birth date, address, signature and a brief identifying description including “sex, weight, height, eye color and hair color.” An Arizona driver’s license or U.S. passport would meet this criteria.

If passengers are unable or refuses to show identification, the officer could charge them with a class 2 misdemeanor, punishable by up to four months in jail.

Posted in Uncategorized and tagged 222222, fafafa.